Everything You Need to Know About Apple’s Product Announcements Today

Apple (NASDAQ: AAPL) hosted its first product announcement for 2020 today, using a virtual format due to the ongoing COVID-19 pandemic. As expected, there were no new iPhones shown off; that unveiling will probably happen next month. Instead, the headline products were Apple Watch Series 6 and iPad Air 4.

Here’s everything you need to know about Apple’s announcements today. 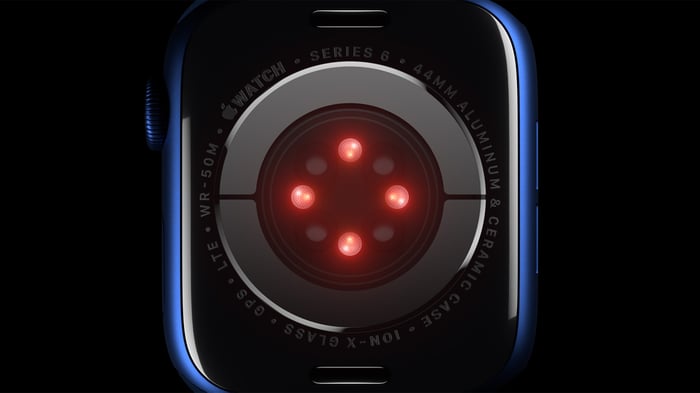 The biggest update for Apple Watch Series 6 is the addition of an SpO2 sensor that can measure blood oxygen levels. Apple and Fitbit (NYSE: FIT) have been one-upping each other in recent years with smartwatch features. In this case, Apple is catching up with Fitbit, which activated the dormant SpO2 sensor for blood monitoring earlier this year. Apple also noted that the government of Singapore will soon start incentivizing Apple Watch purchases, again matching something Fitbit has already accomplished.

Apple Watch Series 6 is powered by a dual-core S6 system-in-package (SiP), which is based on the company’s A13 Bionic chip. The latest model will feature a brighter always-on display and the option of blue and red color finishes. Additionally, there are some new watch bands and watch faces.

The Cupertino tech giant is also introducing a more affordable Apple Watch SE, using a similar strategy to to the iPhone lineup. Apple Watch SE won’t have an SpO2 sensor and will use last year’s S5 chip. The cheaper model also won’t be able to take ECGs, nor will it have an always-on display. Apple Watch SE is basically an Apple Watch Series 4 with some internal spec bumps.

Apple is keeping the Series 3 in the lineup at the same $199 price point that has been resonating with consumers. Series 6 will start at the same $399 price point as last year, while the SE will be priced at $279. Apple is introducing Apple Card financing for its Watch lineup, and the new models ship on Friday.

Apple had already refreshed the iPad Pro earlier this year, so today’s update focused on the entry-level iPad and the iPad Air. CEO Tim Cook disclosed that Apple has now sold over 500 million iPads cumulatively since the tablet was launched a decade ago.

The eighth-generation iPad is getting a minor spec bump to an A12 chip while keeping the same $329 price point. In contrast, the iPad Air 4 is getting a full redesign to resemble the iPad Pro, featuring an all-screen format with no home button. The new model is getting a 10.9-inch display, a tiny bit smaller than the Pro’s 11-inch display. There’s no TrueDepth camera or Face ID, but Apple is moving Touch ID into the top button, in line with previous rumors.

iPad Air 4 is also the first device to get this year’s A14 Bionic processor, which is an industry first in adopting 5-nanometer process technology. The powerhouse of a chip will have a six-core CPU and a four-core GPU, and will see significant gains in machine-learning performance. Apple is also ditching its Lightning connector and moving to USB-C, just like the iPad Pro. It will even support Apple Pencil 2 and the new Magic Keyboard accessories.

In other words, the differences between iPad Air 4 and iPad Pro are now fairly negligible, which might make it hard to justify the price differential. iPad Air 4 starts at $599, or $200 cheaper than the Pro models. 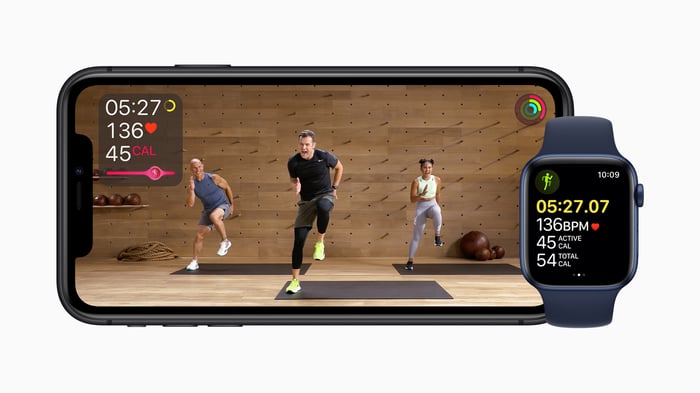 A new service and a bundle

In line with its ongoing emphasis on fitness, Apple introduced a new Apple Fitness+ service that will compete with Peloton (NASDAQ: PTON). The service will include a catalog of studio-style workout classes delivered by trainers across 10 different workout types, using on-device intelligence for privacy purposes when recommending workouts. Apple will include a three-month trial with new Apple Watch purchases, and then the service will cost either $10 per month or $80 per year.

Peloton shares fell on the news, but some analysts expect the service to have a “limited impact” on Peloton’s business, at least initially, due to a smaller content catalog.

Apple finally unveiled the oft-rumored Apple One services bundle, which will include discounts when consumers sign up for multiple services.

10 stocks we like better than Apple
When investing geniuses David and Tom Gardner have a stock tip, it can pay to listen. After all, the newsletter they have run for over a decade, Motley Fool Stock Advisor, has tripled the market.*

David and Tom just revealed what they believe are the ten best stocks for investors to buy right now… and Apple wasn’t one of them! That’s right — they think these 10 stocks are even better buys.