Last month, Tesla (NASDAQ: TSLA) and Apple (NASDAQ: AAPL) carried out 5-for-1 and 4-for-1 splits respectively. Leading into the splits, both stocks furiously rallied to new highs on the news.

With investors treating both split decisions so bullishly, it’s important to highlight the splits’ influence on market fluctuations in the past, and if this is truly an investable event. Let’s take a closer look. 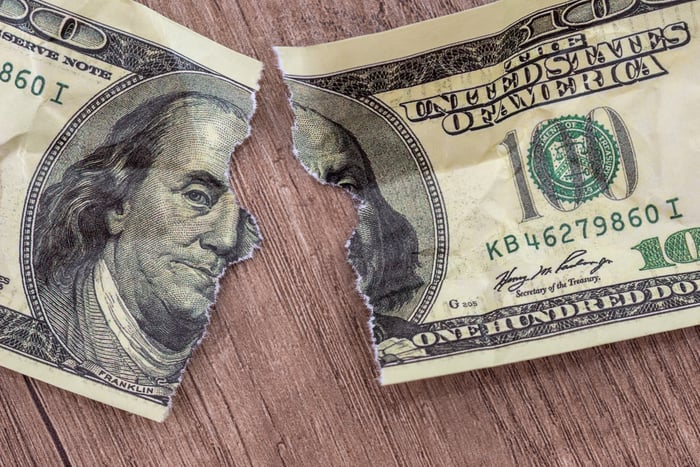 What is a stock split?

The new price per share is determined by dividing the previous share price by the factor by which the share float grew. This event has zero impact on a company’s valuation or future prospects. Instead of 1 share at $2000, you have 5 shares at $400.

Stock split popularity coincided with two noticeably troubling stock market crashes. The concept of a split was invented in 1927 where it was liberally used until the Great Depression ravaged markets in 1929.

Splits can make it easier for inexperienced investors to try their hand in investing, thinking they are getting compelling deals. Some investors in 1929, however, didn’t have access to investing resources and didn’t fully grasp the lack of effect a stock split has on value. The pain was quite real for some in the years that followed with stock market averages dropping by 80% by 1932.

That noticeable bump again coincided with the market peaking and later experiencing a painful crash. Just like in 1929, stock splits were taken — by some — as an event making stocks more affordable and valuable to shareholders. That is simply not the case. For hot Dot-com stocks like Qualcomm it took until last year to reclaim its all-time highs of $89.66 — nearly 2 decades after the technology bubble popped.

This year, Apple’s and Tesla’s share prices rocketed higher in the weeks leading up to the announced splits. For example, in the 2 weeks prior to the event Tesla’s equity value jumped 81% with no other news. The chart below clearly depicts the notable outperformance Tesla has enjoyed over the S&P 500 since the announcement was made August 11th. It has since given back over half of that equity bump, but the stock is still far outperforming the S&P 500, as shown below. Apple’s price action has been slightly less volatile but similar. While the wildly swinging charts of Apple and Tesla do look eerily similar to split stocks in 1929 and 2000, there is reason to believe this time is different. Why? 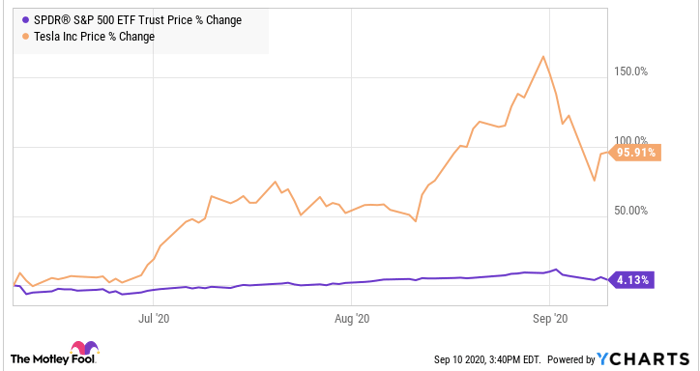 Today, cautionary resources on the irrelevant nature of a stock split are more readily accessible. Furthermore, the advent of fractional shares removed some of the demand for cheaper shares. Now investors can buy a small piece of an Apple share, rather than having to shell out well over $100 to do so. This essentially removes any unique benefit from splitting a stock. Fractional shares foster the same affordability for investors starting out that splits do, without all of the drama.

Another interesting difference between this period of high-profile stock splits vs. prior periods? A 2020 federal funds rate that is below 1% versus over 5% in 1929 and 2000. Today’s historically low interest rates provide weaker direct competition to equity.

With a Federal Reserve explicitly telling you it’s committed to higher inflation in recent meetings, that rate should continue to stay low and be a boon to equity valuations (raising rates is deflationary). While Apple and Tesla may be enjoying share returns due to a less-than-meaningful stock split, the returns could stick around amid monetary policy that is far more favorable than in 1929 or 2000.

While I would totally avoid chasing parabolic stock price rises in response to stock splits, I do not believe this round of splits is depicting a market peak like it has in the past. Readily accessible resources on how little stock splits actually matter, fractional shares, and a Fed fixated on boosting inflation all provide a more comfortable setup for stock markets to continue pushing higher. Still, investors would be well-served tune out the noise associated with splits altogether.

10 stocks we like better than Apple
When investing geniuses David and Tom Gardner have a stock tip, it can pay to listen. After all, the newsletter they have run for over a decade, Motley Fool Stock Advisor, has tripled the market.*

David and Tom just revealed what they believe are the ten best stocks for investors to buy right now… and Apple wasn’t one of them! That’s right — they think these 10 stocks are even better buys.