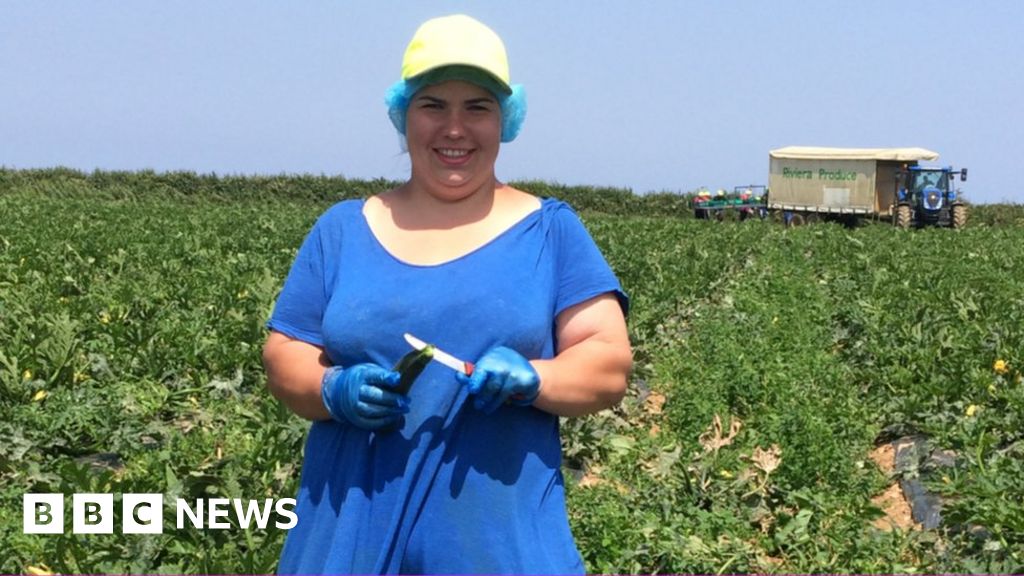 Anastasia Savchenko was at agricultural university in Kharkiv in the Ukraine when she saw a Facebook advert for a job picking courgettes on a farm in Cornwall.

The process of being interviewed and receiving her six-month work visa took about six weeks.

She is among 30 workers from non-EU countries who recently started at Cornish farm Riviera Produce as part of a Home Office trial.

In total, 2,500 people from Ukraine, Moldova and Russia have been recruited for seasonal work on farms from the South of England to Scotland.

“I came here to earn money so I can start a business, a little shop with children’s clothing and things for new mums”, 31-year-old Ms Savchenko says.

“We really like the work, although to start with it was a bit bumpy because of the weather. There’s plenty of time to meet friends, to go to town and the seaside”.

Ms Savchenko believes her compatriots hope the trial will continue in future.

“People in the Ukraine are hoping they’ll have the opportunity to come and earn money and get somewhere in life, because the situation in Ukraine as regards work is quite hard.”

Michailo Sudak, who used to be in the Ukrainian army, is on the same visa as Anastasia.

He wanted to try new opportunities and found out about the job through a friend: “It’s good for us to be here because we can earn money here, to buy flats or a car when we go home. Because in Ukraine, it’s impossible to do”.

He found the visa expensive. But he likes the job and would consider returning.

‘We can’t get local people’

He used to rely on migrant workers from EU countries such as Poland and Lithuania to pick his cauliflowers, courgettes and brassicas, then more recently Romania and Bulgaria.

But in the past two years, their home economies picked up and the exchange rate became less favourable. Fewer have wanted to come.

Mr Simmons also believes uncertainty over Brexit has put them off. “We cannot get local people to come and harvest the crops.

“Without having these migrant workers the horticulture sector is dead. Last year in Cornwall there were crops that weren’t harvested because there weren’t enough staff,” he says.

The Home Office pilot Ms Savchenko and Mr Sudak are on is a test of how a visa based immigration programme for seasonal farm jobs could work.

Two companies, Pro Force and Concordia, run the scheme’s recruitment. Sorting visas for so many people was challenging, but has been achieved. Hundreds are already in the UK working.

“We could have filled the visas we had three times over at least,” she says.

The pilot is not designed to provide all the workers the horticulture sector needs.

However, the National Farmers’ Union says it could help solve growers’ recruitment problem. It is asking the government to drastically expand the scheme to 30,000 workers next year.

Mr Simmons is also keen for the scheme to be expanded: “Hopefully it’ll demonstrate to the government that the scheme will work and can be rolled out.

“We’ve got the work here for them, it brings them in on a visa so they’re restricted to come to our farm, and it’s a win-win situation for all concerned”.

The Home Office says it will “keep the scheme under review to assess how successful it has been”, adding that this will help determine longer-term arrangements.

It is also engaging with the wider agricultural sector as it looks to design the UK’s future immigration system.